Home > News > Honoring 232: A Call to Ensure a Safe Seat for Passengers at Every Age
< More News Stories

Honoring 232: A Call to Ensure a Safe Seat for Passengers at Every Age 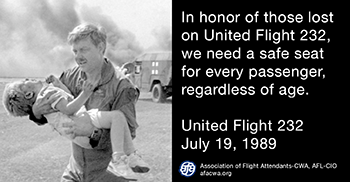 On the 30th remembrance of the United Flight 232 Sioux City crash that killed 111 people including an infant without a safe seat, AFA calls on the FAA and lawmakers to ensure that every passenger is secured in an aircraft seat, regardless of age.

Susan White, a current Flight Attendant and a member of the crew of United Flight 232, urges AFA submitted testimony for the House Committee on Transportation & Infrastructure, Subcommittee on Aviation “State of Aviation Safety” hearing this week, calling attention to the 30-year remembrance and the NTSB recommendations following investigation of the Sioux City DC-10 crash.

“Flight attendants are critical to passenger safety, especially in the event of an emergency. At no time was this more evident than the crash landing of United Flight 232 on this day thirty years ago, when a brave flight crew jumped into action and saved more than 100 lives,” said Chairman Peter DeFazio (D-OR). “This day in history is also a sobering reminder that ensuring safety is the most important work that my Committee does. Over the years, I’ve been proud to advocate on behalf of our flight crews and passengers, and I will continue to fight to make our system even safer.”

Currently, the FAA has no rules that require children under the age of two to be secured safely in their seats. The AFA testimony notes, “Onboard, a coffee pot has more protection than an infant in the event of a crash. The captain instructs everyone to buckle up for protection against severe turbulence, with the exception of our smallest passengers.”

"Thirty years later, we must remember the lives lost in the heartbreaking United 232 crash and make sure we’re applying the lessons learned from that fateful incident to prevent future tragedies,” said Senator Patty Murray (D-WA). “I’m proud to stand with AFA-CWA as we continue working to strengthen our laws and policies to ensure air travel remains safe and reliable for all of us."