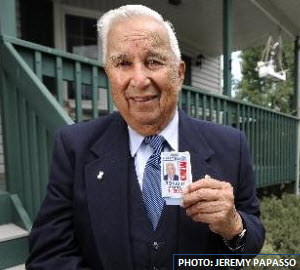 In 1949, when Ron Akana responded to a United Airlines want ad in the Honolulu newspaper, he and his friends weren't even sure what a "steward" was.

Sixty-three years later, Akana, who will turn 84 on Sept. 8, is making his last flight with the airline, wrapping up a career that earned him a spot in Guinness World Records as the longest-tenured flight attendant in U.S. history.

Fittingly, the Honolulu native will serve as the crew chief for a flight back to his hometown, with his wife, son John, daughter Jean, also a United flight attendant, and grandson Kyle, joining him on board. When he comes back to Denver International Airport on Monday, he'll fly as a passenger.

"It was a job that started to grow on a person. I always flew with new personalities," Akana said at his north Boulder home. "I know I'll miss it, but the time has come. Aching bones and joints."

Akana was one of eight Hawaiian natives hired by United and its president Pat Patterson, also a Hawaii native, in 1949 to serve on the eight Boeing Stratocruisers that made up the airline's first Hawaiian fleet. Akana and his fellow "stewards" represented the eight islands of Hawaii, he said.

In the early days, Akana and his fellow flight attendants made $185 a month, plus $6 or $7 a day in expenses, he said. Money was hardly the only benefit for a bunch of 20-something guys from Hawaii.

"In those days, when you could get off the island it was a big deal," Akana said. "We flew into San Francisco and did a lot of socializing."

Akana was on some of United's first flights between Honolulu and Los Angeles in 1951, and he has fond memories of days when Hollywood starlets like Deborah Kerr would stay in private staterooms in the belly of the big Boeing planes.

On one flight, Akana was delivering the safety presentation for the passengers when comedy legend Red Skelton, trademark cigar in mouth, mimicked the entire thing from a nearby seat.

"He just had everybody laughing," Akana recalled. "No one was listening to me, of course."

In 1962, a co-worker of Akana's left him a note in his work mailbox that a good-looking young United stewardess had just landed in Hawaii and was looking for company on the beach at Waikiki. That day he met Elizabeth Ann Ebersole, and six months later the two were married in her hometown of Baltimore.

"He was handsome, and he took the time to come to the beach," Elizabeth Akana said matter-of-factly when asked what attracted her to her husband.

The Akanas moved to Boulder in 2001 to be closer to their daughter Jean and her family. Their home is covered in mementos from Ron Akana's long career, including awards, plaques and framed photos, including one of him with Bill Clinton on a flight from Honolulu to Sydney taken just days before 9/11.

"Can you tell I'm proud of him?" Elizabeth Akana asked as she pointed to photographs and news clippings from her husband's career.

United regulations forced Elizabeth Akana to quit her stewardess job shortly after their marriage in 1963. She said over the years, no matter what the situation -- even when cost-of-living raises were canned but executive bonuses were still handed out -- her husband stuck by the airline, demonstrating a loyalty not often seen these days.

On Sunday, after crossing the Pacific Ocean some 10,000 times, logging enough miles to travel to the moon and back 40 times, according to United Airlines estimates, Akana will take off his flight wings for good. The wings are pretty special themselves, featuring 11 commemorative rhinestones, the first for his 10-year anniversary with United and one for each five years after that.

Akana said he plans to travel with his wife frequently in his retirement, using his still largely intact travel benefits with United and an RV to visit bed and breakfasts in the Pacific Northwest.

Asked what he would miss most about his life's work, he said the passengers and fellow crew members he spent so much time with in the air and in cities worldwide.

"It's the people I worked with," he said. "They always had interesting experiences that we all became part of."